Slovak Rectors held talks at the European Commission in Brussels

Rectors of Slovak universities have been discussing the current European policies, processes and tools at the European Commission. The meeting was organized by the Permanent Representation of the European Commission in the Slovak Republic on the initiative of Slovak Rectors´ Conference (SRC). The participants also had an opportunity to meet the representatives of the Permanent Representation of the SR to the EC in person.

In his address to the Rectors, Maroš Šefčovič, the European Commission Vice President, emphasized the importance of getting involved not only in the Structural Funds but also in European programmes supporting growth and employment.

Presentations and discussions with representatives of the European Commission and Directorates-General focused on science and research, education and structural funds. Rectors were interested in the use of European programmes, such as Horizon 2020, as well as setting the following ninth Framework Programme for Research and Innovation. Slovak universities now have the opportunity to use specialized programmes oriented on supporting research institutions from EU13 countries such as Teaming, Twinning, ERA chairs and Widening Fellowships, which will support their excellence. The challenge for Slovak education will be the implementation of open-access and open-science policies, which are conditioned by legislative changes. According to SRC, in our conditions, open access to publication is unrealistic without additional financial resources. At the same time, this policy must also be implemented in national programmes.

The SRC has supported the activities of the pan-European associations of universities which, in the framework of the adoption of the Multiannual Financial Framework of the European Union for the years 2021 - 2027, want to increase the budget of the future Horizon Europe programme to €160 billion. The European Framework Programme has become the major source of support for basic research in Europe, which funds projects on the basis of excellence criterion. Due to its relatively low budget, it cannot support all projects which have passed the assessment thresholds as being excellent.

Another challenge for the Slovak academia is the European Universities Networks initiative, which should support alliances of universities from European and national sources. The SRC is aware of the importance of taking part in the initiative; several Slovak universities are taking concrete steps even before the call is published. However, the initiative is accompanied by extraordinary complexity in national conditions and it is subject to prior funding of higher education and science. Marek Šmid, the President of the Slovak Rectors´ Conference, says: “In order for Slovak universities to be able to respond to the current development in the world under their own responsibility, further significant legislative and financial changes must be taken, which will, while strengthening the autonomy of the universities, help to create competitive environment in Slovakia enabling the universities to make full use of their potential.”

At the end of the event, SRC members met at a working lunch with Vladimír Šuch, Director General of the Joint Research Centre, and Juraj Nociar, the Head of the Cabinet of the European Commission Vice-President, to discuss ways to increase the success rate of Slovak universities in European programmes. 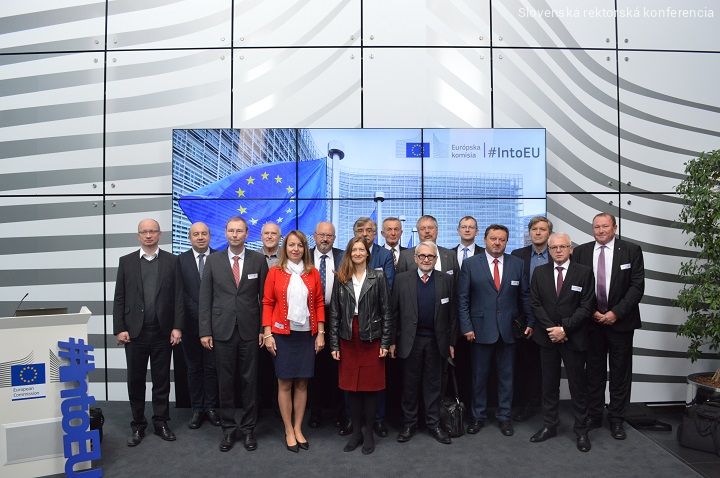